It is well-known that the 2022 Assembly Election was bruising for unionism. However, the scale of unionism’s electoral decline cannot be overstated.

Unionism itself has been the architect of this decline which, ironically, occurs amid the demise of certainties upon which unionism has always relied. It was flying high in May 2016 when the DUP won ten more seats than Sinn Féin and the two main unionist parties retained all their seats. Unionist fortunes shifted in 2017 when the DUP ended up just one seat ahead of Sinn Féin and unionism’s Assembly majority vanished. Then came a myriad of blows for unionism in May 2022: the DUP secured its lowest percentage of first-preference votes since 1998, the unionist bloc received its lowest share of votes and seats in the history of the current Assembly, unionists secured only two more seats than nationalists and, to top it all, Sinn Féin became the largest party.

It is difficult to gauge exactly why unionism’s fortunes have receded. However, it may well be down to a series of strategic errors over the last decade which have left unionism and the Union itself more vulnerable than ever before. The current modus operandi of unionism increases the likelihood of a pro-reunification majority materialising. It is therefore timely to ask how unionism got here, where it is now, and where it must go if it is to halt its decline and preserve the Union.

How did unionism get here?

Unionism’s biggest strategic error was undoubtedly jumping on the Brexit bandwagon. The DUP and other unionists’ support for Brexit was an own goal of massive proportions. Most of Northern Ireland’s voters opted to remain in the EU, and all the major parties except for unionists supported Remain. Northern Irish unionists could not have thwarted the decisive will of the English electorate. However, in throwing their weight behind the Leave campaign and Brexit, the DUP and other unionists ignored the wishes of the population they serve, giving other parties sticks to beat them with. More significantly, the DUP’s support for Brexit, the threat Brexit presents to the almost imperceptible border in Ireland, and unionism’s unwillingness to acknowledge this threat have reinvigorated talk of a united Ireland and calls for a border poll – both now occur on a scale that was unimaginable before 2016.

Another strategic error for unionism has been its intractable opposition to LGBT rights, the legalisation of abortion, and Irish language rights. In attempting to block change in these areas, the DUP has ignored the majority’s views, thereby giving abundant ammunition to political opponents, and seemingly driving many moderate unionists towards other parties, particularly Alliance.

Perhaps unionism’s ultimate strategic error has been its vociferous response to the Protocol. While some hard-line unionists defected to the TUV last May, it seems many more moderate unionists defected to Alliance which achieved its best ever electoral performance in May 2022. Through the tactics they have used in opposition to the Protocol, including their ongoing boycott of the devolved institutions at a time when health services are in freefall and the cost of living has skyrocketed, the DUP has deepened the fissures in the unionist vote. More significantly, they have driven even soft nationalists towards the unionist bogeyman Sinn Féin.

Where is unionism now?

While the DUP may fare better in the next Assembly Election, more nationalists may well flock towards Sinn Féin to keep them on top. Sinn Féin could well lead the next Irish government and thereby increase their diplomatic and political clout. Other coinciding factors outside unionism’s control serve to further weaken unionism and the Union itself. First, the very thing Northern Ireland was meant to secure for eternity has disappeared: the Protestant, unionist majority. The 2021 Census found that those from a Catholic background now outnumber those from a Protestant background. Demography may not be destiny, but this immense change coupled with the evaporation of unionism’s political majority surely makes the Union less secure.

Further, it looks increasingly likely that Rishi Sunak’s government will reach a détente with the EU over the Protocol. While they may agree upon adjustments to the Protocol, it is highly unlikely to be abolished. The Tories did the very thing they told unionists they would not by putting a border down the Irish Sea to deliver a hard Brexit for the English and Welsh voters who keep them in government. They do not want a trade war with the EU and have a greater imperative to appease Brussels than to placate unionists. They care little for unionist grievances as evidenced by their recurrent shafting of the DUP and unionism. If a Labour government emerges, they will care even less. Moreover, while we still await their judgment, the Supreme Court may well uphold the decisions of Northern Ireland’s courts in rejecting unionism’s fallacious argument that the Protocol changes Northern Ireland’s constitutional status contrary to the Good Friday Agreement.

Finally, traditional unionist arguments against a united Ireland no longer hold currency. The Republic is not a Holy Catholic state today and is becoming ever more liberal. Southerners enjoy a higher standard of living and longer life expectancy – the South does not yet have universal healthcare, but outcomes and waiting lists are comparable to the North. The Republic is no longer insular, but an outward-looking state with strong international allies in the EU and USA. Furthermore, its finances are in better order than the UK’s and while living costs are higher, so too are salaries and there are greater opportunities for professional people.

There is cause for unionist optimism in that opinion polls invariably indicate that more Northerners would vote to remain in the UK than not if a border poll occurred today. Yet, some polls have found that most Northerners wish to see a border poll, and a recent LucidTalk poll found that a pro-reunification majority could emerge in the coming decades. This, coupled with the end of its political majority, the ascent of Sinn Féin, demographic change, and the Republic’s development make unionism and pro-Union arguments weaker than they have ever been.

Ironically, amid these realities, the DUP maintains it will boycott Stormont until the Protocol is gone or eviscerated. Recently, their campaign has taken bizarre turns, as with Jeffrey Donaldson’s bogus claims about health trusts facing Protocol-related difficulties. To compound their folly, it increasingly appears that unelected and unhinged loyalist activists are directing their policy. Not only does unionism look weaker than ever, but it seems determined to maintain its current strategy. However, given everything above, the traditional trajectory of unionism is no longer tenable. By continuing upon it, unionism may well be digging its own grave. 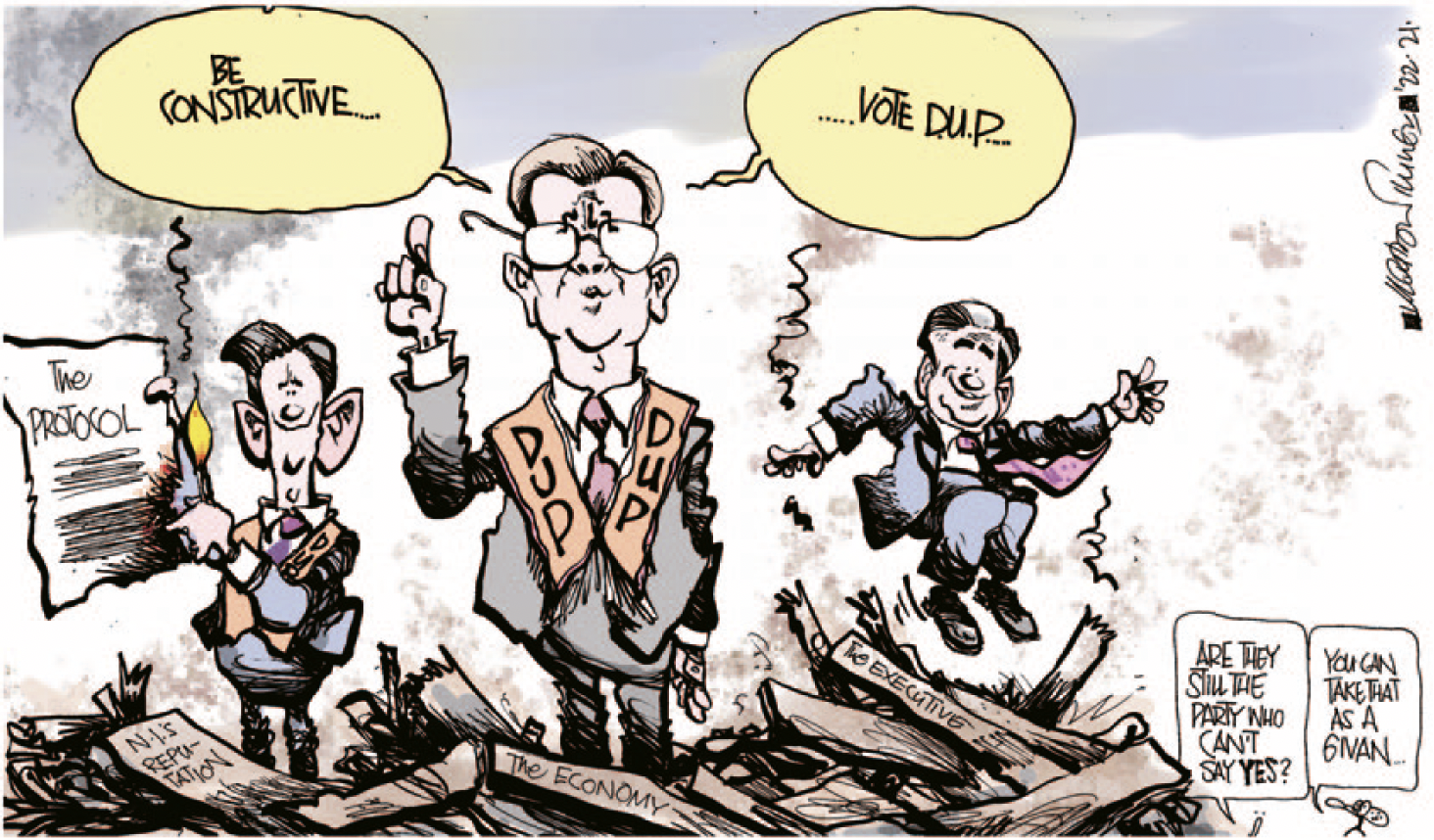 What must unionism do?

If it is to stem its decline and preserve the Union, unionism must undertake significant introspection and reform. Unionist politicians must understand a fundamental distinction between unionism and nationalism: nationalists can afford to lose a border poll – they have lived with partition for over a century, and they can wait an extra seven years for another border poll. Unionism, however, cannot afford to lose a border poll – loyalists and unionists view their place in the UK as integral to their identity and would feel like a displaced minority in a united Ireland, which would be ideologically catastrophic for them and for unionism itself. Having understood this, unionism must embark upon damage limitation.

Unionists must come to accept the Protocol. There may be scope for modifications to it, but it is fantastical to think that completely unencumbered trade between Northern Ireland and Great Britain will return. If the UK government were to unilaterally override the Protocol and trigger a hardened border in Ireland, pro-unification sentiment would undoubtedly grow. Unionists must stop expecting the Tories to do their bidding – they have made clear that they will do whatever is most expedient for them irrespective of what unionists or the majority of Northern Ireland thinks even if, as with the legacy bill, it is grist to the republican mill.

Next, the DUP must return to Stormont and facilitate the formation of an Executive – their abstention is getting them nowhere, and the spectre of a growing legislative vacuum may well increase Sinn Féin’s vote share. If the DUP will not return, the UUP should demonstrate its mettle and push for changes to the Executive formation procedures.

Alongside this, the DUP et al. must abandon alliances with unelected loyalist activists, who represent a miniscule cohort and whose behaviour is driving nationalist sentiment and making unionist politicians appear idiotic by association. Lastly, the DUP must start reaching out to moderates within unionism and they must forego attempts to subvert the majority’s will regarding issues of rights. Simply, unionism must abandon its legacy of regressive, intransigent, “not-an-inchism.”

The choice for unionism

Whether or not unionism may reverse its electoral decline, the changes above may be enough to stem the flow of moderate unionists away from unionist parties and to decelerate the growth of pro-reunification sentiment. A border poll and a united Ireland may not be ineluctable – if the status quo starts to work, undecided voters may reject change, thereby allowing unionism to assert a positive vision for a Union that works for everybody in Northern Ireland. However, unionism must change if it and the Union are to endure in the long term.

Unionism can continue to poke moderate unionists and nationalists in the eye. But unionism is in decline and the certainties upon which unionism relied are no more. The current behaviour of the DUP et al. gives republicans the kind of propaganda they could never manufacture themselves. It may be that unionism’s current path leads in only one direction – a border poll and, potentially, a united Ireland. If so, reform within unionism is the only way to preserve unionism and the Union itself.

Unionism in decline: time to change the trajectory

What does Labour think?

There’s appetite for reforming Stormont, but not abandoning power-sharing

The opinion poll that shouldn’t have surprised anybody: a letter from Dublin