A number of recent developments have threatened the stability and future of the Good Friday Settlement. The British Government’s delivery of a hard Brexit has undermined one of the important but unstated underpinnings of the Good Friday Agreement – joint membership of the European Union and the single economic market. The focus of the European Commission and Council on ‘no hard border in Ireland’ and a highly legalistic approach to the Northern Ireland Protocol negotiated at the last minute without understanding the practical implications has raised communal tensions here in the North. The continuing rivalry between the DUP and Sinn Fein over the Protocol and legislation on the Irish language has led to continuing strains and breakdowns within the Executive. All of this has led to serious disputes and tensions within the DUP and the wider unionist community.

The focus of this issue is on how these problems might be resolved or at least better managed. An analysis of the repeated history of breakdowns and suspensions of the institutions agreed in 1998 has highlighted the continuing need for intervention by the two governments and for changes in the details of the 1998 Agreement. The analysis by the UCL Constitution Unit, prepared by a balanced team of legal and political experts, has highlighted the dangers of embarking on an ‘in/out’ referendum on unification without clarity or agreement on what form unification might take.

The suggested remedies for these problems involve arrangements both for internal power-sharing and for longer term constitutional issues: first some amendments to the Assembly rules to diminish the powers currently enjoyed by the DUP and Sinn Fein as representatives of the more extreme and contradictory versions of unionism and nationalism and to give greater influence to ‘others’ with a less confrontational approach; secondly some better ways of preparing for any eventual unification referendums both in the North and in the Republic given the obvious need for changes in the Irish Constitution. None of these issues are easily resolved. But there is clearly a need for more serious and detailed discussion on them all. 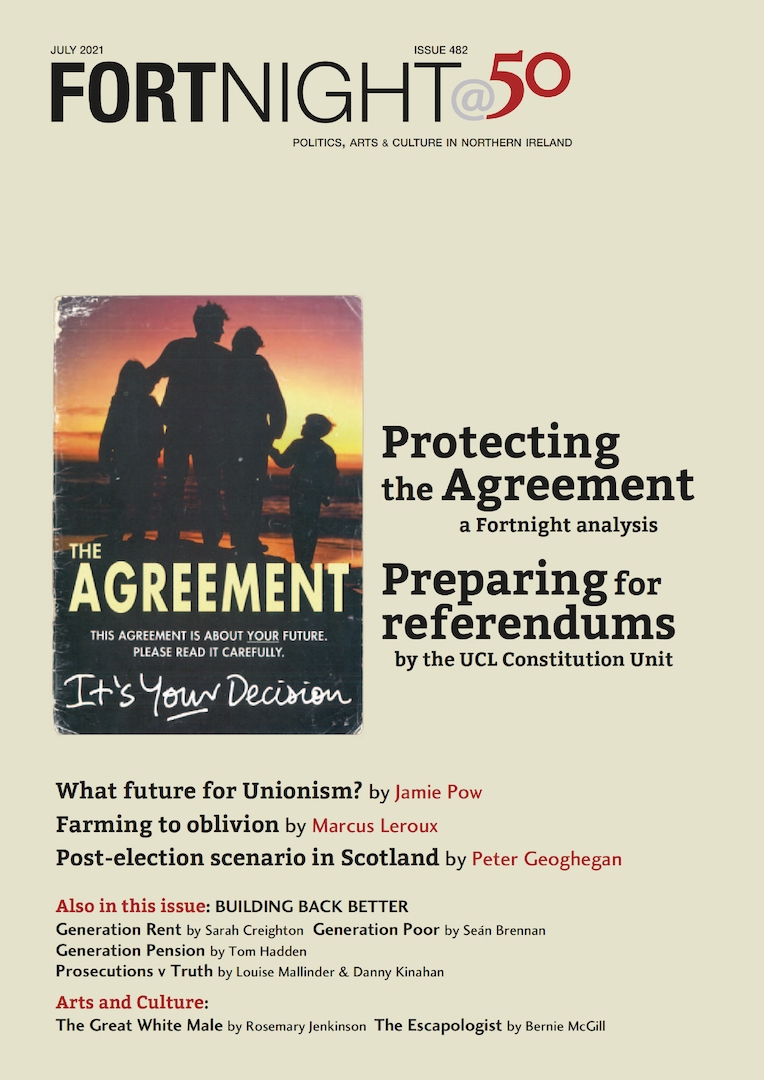 Rosemary Jenkinson The harpooning of the Great White male Bernard Conlon Is there something in the Ancient Airs in Belfast? Bernie McGill The escapologist